Previously, Wire group calls were implemented as a mesh, where each participant was connected to each other in a peer-to-peer fashion. This meant that a client would have to upload their video and audio feeds separately for each participant. This in practice meant that the amount of participants was limited by the upload bandwidth of the clients.

Wire now has a signalling-forwarding unit called SFT which allows clients to upload once and then the SFT fans it out to the other clients. Because connections are not end-to-end anymore now, dTLS encryption offered by WebRTC is not enough anymore as the encryption is terminated at the server-side. To avoid Wire from seeing the contents of calls SFT utilises WebRTC InsertibleStreams to encrypt the packets a second time with a group key that is not known to the server.

With SFT it is thus possible to have conference calls with many participants without compromising end-to-end security.

The following diagram is centered around SFT and its role within a calling setup. Restund is seen as a mere client proxy and its relation to and interaction with a client is explained here. The diagram shows that a call resides on a single SFT instance and that the instance allocates at least one port for media transport per participant in the call. 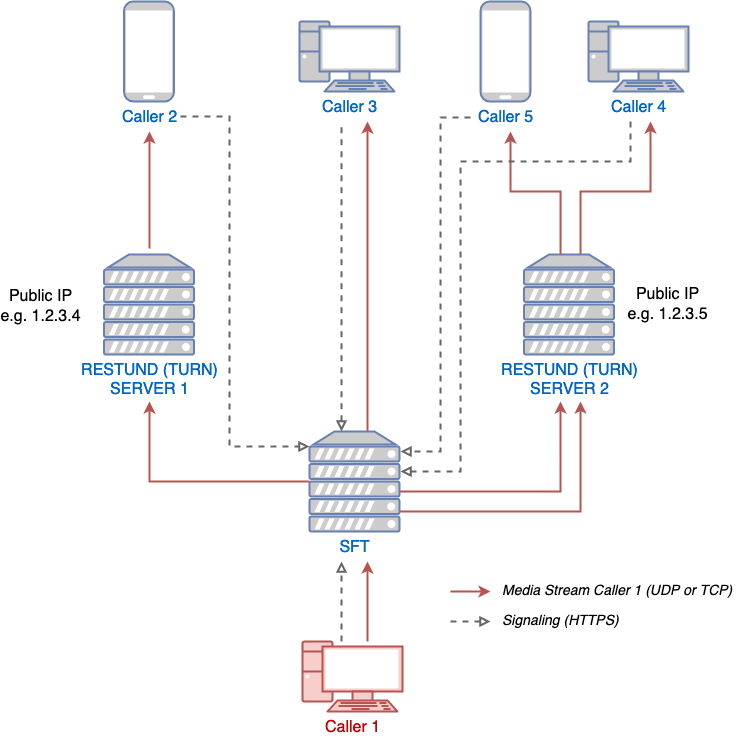 SFT signaling, and media sending from the perspective of one caller¶

At that point a media connection between client A and the SFT server has been established, and they continue talking to each other by using the data-channel, which uses the media connection (i.e. no more HTTPS at that point). There are just 2 HTTPS request/response sequences per participant.

STUN & TURN are both part of a Restund server

Off The Record - an encrypted message sent in a conversation hidden from user’s view but interpreted by user’s clients. It is sent via backend servers and forwarded to other conversation participants, not to or via SFT.

The SFT may need to receive and send traffic over UDP and TCP on a wide range of ports. Due to the fact that Kubernetes services do not support setting port ranges, and Kubernetes pods not being publicly routable (at least in IPv4) we require the SFT pods to run in hostNetwork mode and the pod will bind directly to the default interface of the node.

Due to this hostNetwork limitation only one SFT instance can run per node so if you want to scale up your SFT deployment you will need to increase the amount of kubernetes nodes in your cluster.

As a rule of thumb you will need 1vCPU of compute per 50 participants. SFT will utilise multiple cores. You can use this rule of thumb to decide how many kubernetes nodes you need to provision.