We require communication between the Federator of one (sending) backend and the Federation Ingress of another (receiving) backend to be both mutually authenticated and authorized. More specifically, both backends need to ensure the following:

Authentication between Wire backends is achieved using the mutual authentication feature of TLS as defined in RFC 8556.

In particular, this means that the ingress of each backend needs to be provisioned with one or more trusted root certificates to authenticate certificates provided by other backends when accepting incoming connections.

Conversely, every Federator needs to be provisioned with a client certificate which it uses to authenticate itself towards other backends.

Note that the client certificate is required to be issued with the backend’s infrastructure domain as one of the subject alternative names (SAN), which is defined in RFC 5280.

If a receiving backend fails to authenticate the client certificate, it fails the request with an AuthenticationFailure error.

The discovery process allows a backend to determine the infrastructure domain of a given backend domain.

This step is necessary in two scenarios:

For example, Company A with backend domain company-a.com and infrastructure domain wire.company-a.com could publish

A backend can then be discovered, given its domain, by issuing a DNS query for the SRV record specifying the wire-server-federator service.

In case this process fails the Federator fails to forward the request with a DiscoveryFailure error.

After retrieving the SRV record for a given domain, the local backend caches the backend domain <–> infrastructure domain mapping for the duration indicated in the TTL field of the record.

Due to this caching behavior, the TTL value of the SRV record dictates at which intervals remote backends will refresh their mapping of the local backend’s backend domain to infrastructure domain. As a consequence a value in the order of magnitude of 24 hours will reduce the amount of overhead for remote backends.

After an incoming connection is authenticated the backend authorizes the request. It does so by verifying that the backend domain of the sender is contained in the domain allow list.

Since the request is authenticated only by the infrastructure domain the sending backend is required to add its backend domain as a Wire-Origin-Domain header to the request. The receiving backend follows the process described in Discovery and verifies that the discovered infrastructure domain for the backend domain indicated in the Wire-Origin-Domain header is one of the Subject Alternative Names contained in the client certificate used to sign the request. If this is not the case, the receiving backend fails the request with a ValidationError.

In addition to the general authorization step that is performed by the federator when a new, mutually authenticated TLS connection is established, the component processing the request performs an additional, per-request authorization step.

How this step is performed depends on the API endpoint, the contents of the request and the context in which it is made.

See the documentation of the individual API endpoints for details.

The content and format of the message is meant to be representative. For the definitions of the actual payloads, please see the federation API section.

The scenario is that the brig at infra.a.com has received a user search request from Alice, one of its clients. 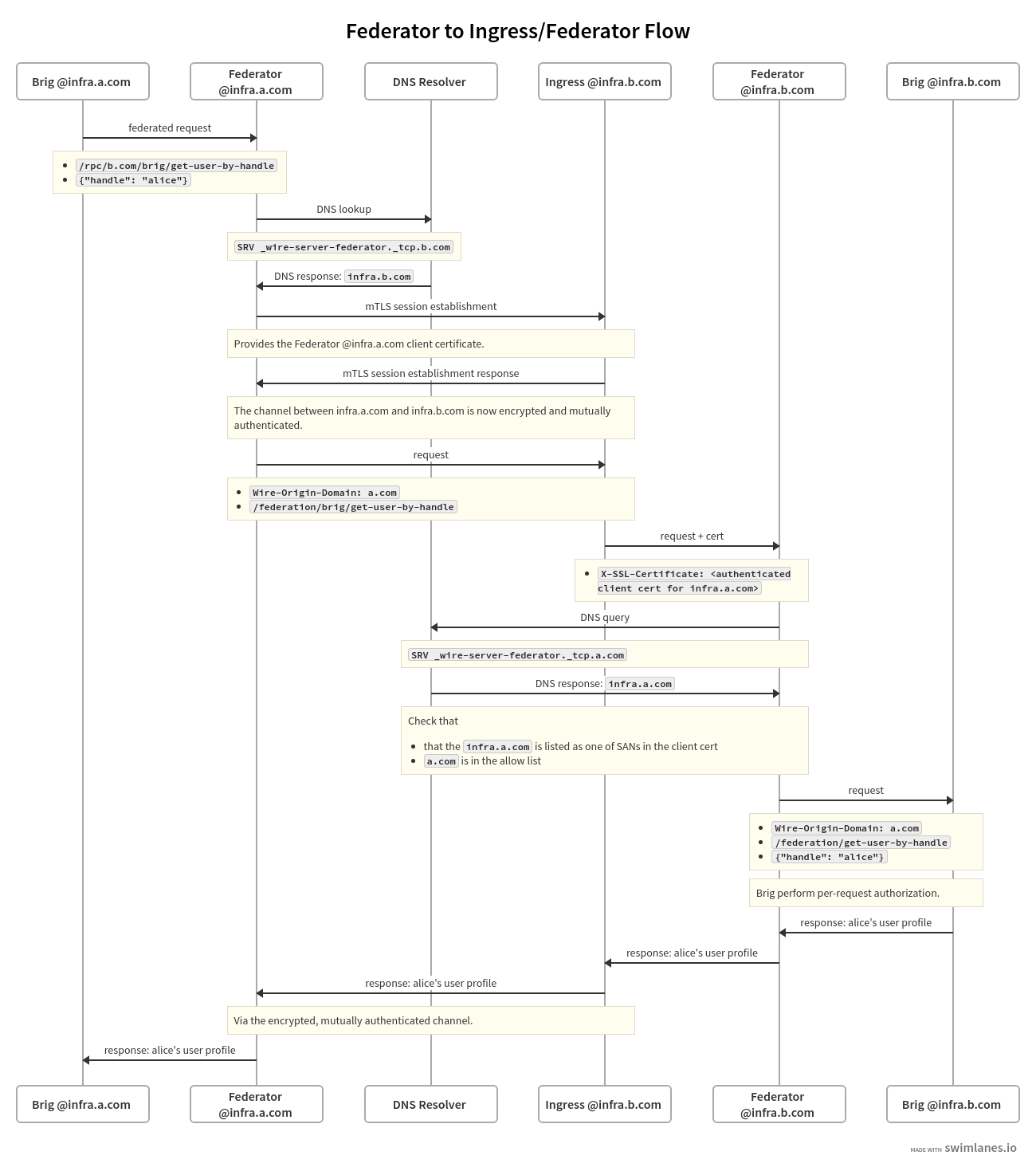